Pedro Kos’s recent documentary on the IHM nuns of southern California, Rebel Hearts, deftly utilizes binaries to examine the congregation as it discerned how to deal with the tumult of the 1960s, Vatican II, and significant conflicts with their local cardinal-bishop. In this review, Bethany J. Welch, PhD reflects on Kos’s filmmaking, his use of these binaries, and her own transition to religious life.  Click here to download a copy of this essay.

Bethany J. Welch, PhD practices applied scholarship for the common good, which has involved leading community-based organizations, coordinating participatory action research, teaching urban studies, and conducting program evaluations for consulting clients. Welch currently serves as the Justice and Peace Fellow for the Conference of Major Superiors of Men and is a candidate (pre-novice) with the Sisters of St. Joseph of Philadelphia. She can be reached at bethanyjwelch@gmail.com.

As a big fan of Corita Kent—the deceased pop artist and former Sister of the Immaculate Heart of Mary—I was enthusiastic about screening a new documentary that promised to trace the arc of her dynamic life alongside the changes in her community. Rebel Hearts proved to illuminate more than this history for me. It helped frame my own transition into religious life, even as the narrative depicts the departure of others.

The documentary debuted at the Sundance Film Festival in January 2021, the same month that I entered another stage of vocational discernment by moving into a small community of sisters. Our convent is nothing like the sprawling, austere masonry of the convents of mid-century America, or the ones that serve as a backdrop to the unfolding drama of Rebel Hearts. Our home is common enough to be easy to miss: a modest three-bedroom rental in an outer ring suburb in New Jersey. 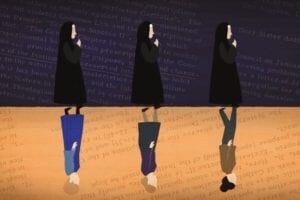 The Immaculate Heart Sisters were told to hide their changes. (Still from the documentary Rebel Hearts. Photo courtesy of discovery+.)

We three wear jeans. We watch Netflix. And sometimes we swap the rhythmic cadence of traditional morning prayer with the tinny digitized sounds of song bowls to mark the minutes of contemplative silence. We are post-Vatican II women religious, living into a reality midwifed by those celebrated in Rebel Hearts.

In an article in Sojourners magazine, that I accidently swiped from a true old-school convent during a discernment weekend a few years back, author Catherine Woodiwiss, describes Corita Kent as having a particular “aesthetic of joy.” This joy radiates across Rebel Hearts, especially in the scenes at Immaculate Heart College. The campus pulsates with the possibilities of this new freedom and new ways of seeing and knowing. The young students are energized. So are their formidable teachers who bring fresh ideas into the classrooms, including the art studio.

However, underneath the vibrant aesthetic and the rippling movement that dances across the screen, is a current of loss. In embracing the emerging newness, the sisters are losing something. They lose credibility with the institutional church. Their leaders lose respect from within their own ranks. The larger society proves to be a cruel companion. There are those who would rather the sisters stay habited, holy, aloof, and repressed.

Rebel Hearts weaves together vintage footage and archival material from the 1960s to capture a period of intense communal discernment prompted by the radical shifts prompted by the Second Vatican Council. It juxtaposes that quickening among the 400 some women who comprised the Immaculate Heart of Mary congregation in Los Angeles with the oppressive presence of a new local ordinary, Cardinal James McIntyre. Corita’s beautiful bold serigraphs become the color palette deployed by animator Una Lorenzen whose visual storytelling fills in gaps and folds over the narration and historical images.

A review of the film in Variety magazine framed the story primarily as a standoff between Cardinal McIntyre and the sisters. This is certainly a central plot point. 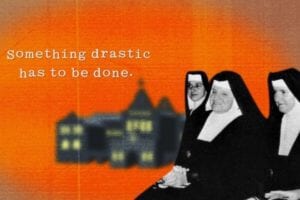 The same social movements that animated the sisters’ opposition to nuclear arms and to racial injustice start to raise questions about unfair labor practices in the archdiocese’s grade schools where many IHM sisters teach. Unwieldly class sizes and limited resources—not to mention low or no pay for sisters—were long the purview of parochial education.  Yet now, emboldened by the “fresh air” Vatican II sent streaming through the congregation’s open windows, the women began to reject the status quo.

To focus solely on the conflict with the cardinal is to miss a more subtle thread, one that those in religious life would identify readily: the gravity and tenuousness of congregational leadership and communal discernment. The protagonist of Rebel Hearts is not Corita Kent but rather, Anita Caspary. She served as president of Immaculate Heart College and was elected Mother General of the congregation in 1963. Her leadership coincided with the renewal of consecrated life unfolding across the globe and somewhat haltingly in the U.S. Catholic Church.

Caspary eventually leads the congregation through a challenging vote as the women are forced to choose between two options: Stay as consecrated women subject to Church leadership or relinquish canonical status to re-found as a lay community. Most ultimately choose the latter. The Immaculate Heart Community emerges in 1970 as an “ecumenical Christian community” with members and leaders from various genders, backgrounds, and perspectives.

Pedro Kos, the documentary’s director, deftly deploys many binaries throughout the film: freedom and structure, religious affiliation and spiritual practice, corporate identity and individuality, sacred and profane. He challenges the viewer to choose sides, to cast their vote. Are you with the old guard in the musty darkness? Or are you picking up a flower crown and marching into the light?

Respectfully, I am here to push back on the binary. I experienced Rebel Hearts as an invitation to grapple with the complexity of religious life in the modern age. It was messy then. It is messy now. The great consolation is that I do not proceed on this path alone; the Cloud of Witnesses companions me along the way. It includes Corita Kent and Anita Caspary who left vowed religious life at different times for different reasons. It includes women who stayed. I count on their collective wisdom and insight for the years ahead.

(Rebel Hearts is streaming now on Discovery+ and can be seen via ticketed screenings at film festivals. Watch the trailer here. Header photo is a still from the documentary Rebel Hearts. Photo courtesy of discovery+.) 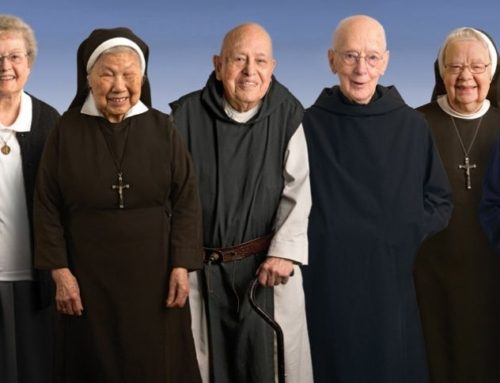 Retirement: A New Version of the Identity Crisis? 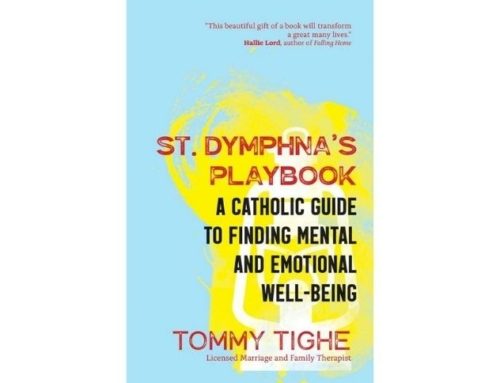 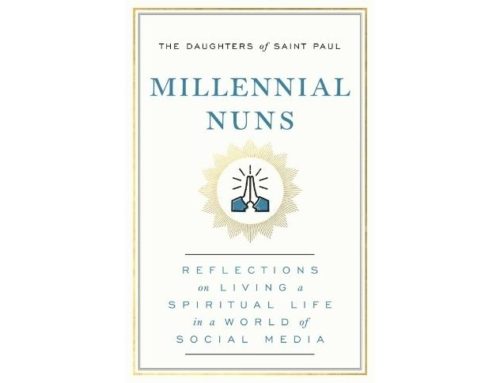 Review of Millennial Nuns: Reflections on Living a Spiritual Life in a World of Social Media 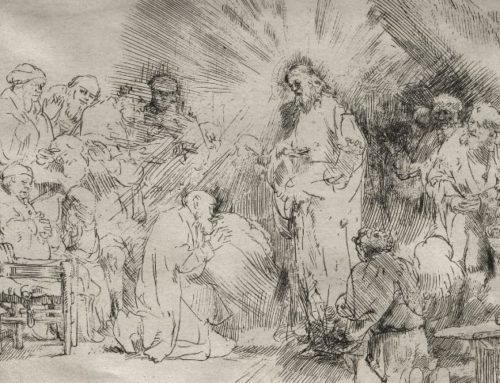 Lessons from the Pandemic, Wisdom for the Synod